Another day of very changeable weather. We have been most fortunate that weather has not brought sustained rain with it. Throughout our trip we have had patches of drizzle, and the odd shower, but have so far managed to avoid riding in sustained showers. Today was no different.

Breakfast at the once grand hotel was good and nourishing (a bacon and egg roll contain all the food-groups you will need). Breakfast was taken before showering, which is against my normal and natural pattern. I am not given to having a fast metabolism (or much of any metabolism at all), and usually shower as part of my waking up routine to get my body engine firing on at least 2 cylinders. The activity and the invigorating water help to get things moving, so I tend to shower before my day gets going.

Today, we slept a bit later than usual. This was because I had been up for a couple of hours in the night. A couple of nights ago I had received an innocuous insect bite on the first knuckle of my right index finger. It swelled a bit and started turning purple and I had bought some ointment in Oban to smear on it. It continued to swell and purple, and in the night I woke from a very uncomfortable hand. It was quite uncomfortable and itchy as anything, and I ended up taking painkillers to try calm it down and get back to sleep. I did fall asleep, but was more tired than usual this morning and so slept in. 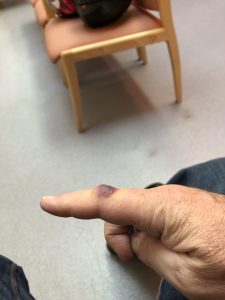 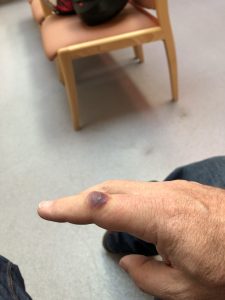 After breakfast and the usual logistics of bike-readying, we set a course for Pitlochry. We had ridden for 3 days without needing fuel, but now a refill was necessary, and I also wanted to find a pharmacy to get further advice on my sore finger. We rode due east alongside the beautiful Loch Tummel, on a pretty quiet road, and stopped a couple of times for pictures. The view from a spot called the Queens View was well justified. 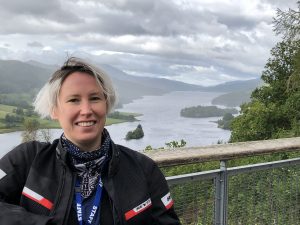 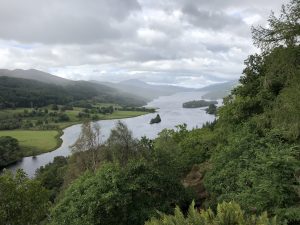 We refuelled at Pitlochry, then went to see the local pharmacist. She took one look at the finger, and sent me off to the local NHS minor injuries clinic. Trish, the local nurse, poked and prodded my knuckle, and then sent me of with a box of antibiotics. Apparently, I will live, and Lena’s concern for my survival was unnecessary.

Coming in to Pitlochry, we started to encounter groups of bikers. There are 3000 people due at the rally we are attending, and we were part of the flock migrating northward towards Aviemore. On the road, the heavens opened up and treated us to a heavy downpour. We decided to stop at Dalwhinnie for lunch (Fish and Chips for me, Soup and Garlic Mushrooms for Mrs), and as soon as we stopped and went in to the cafe the rains stopped, and the sun came out to play.

Having eaten and dried off a bit, we mounted up to ride the final 26 miles to Aviemore. Of course, as we set off, the heavens opened up and drenched us once more. However, the clouds soon scattered and the last 10 miles we rode were dry, and doing 60 mph gave us a chance to mostly dry out. 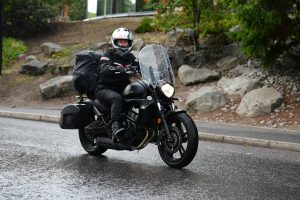 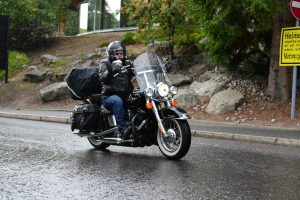 We are now tucked up in bed in our hotel, surrounded by campers, campervans and fellow hoteliers – all here for the rally. There is a complex of 3 hotels, an arena, some open spaces for camping, food stalls, shops and show merchandise and more. We are looking forward to a weekend of biker fun (if we can hack the pace).