We had a fair curry last night at the local Chinese/Indian restaurant, and then I watched Liverpool beat Crystal Palace while my beautiful bride snored quietly alongside me. 2-0 is a decent result, and I fell asleep a happy man. We woke up before the alarm, and followed the daily routine. Breakfast served by Jim and Ele, our B&B hosts, and then we attended to bikes and baggage in the usual format. Drizzle accompanied the routine, but it stopped soon after we set off.

Today was planned as a 54 mile day, but the Satnav planner had taken into account the sea miles. In fact, we rode only 20 miles today, by far the shortest ride so far this trip.

Hugging Loch Gilp as we headed south, the road was sweet and slightly damp. An uneventful half hour passed until we found ourselves facing the small ferry port at Kennacraig, just south of Tarbert. We were checked in, and queued up to load onto the ferry. It was much larger than I was expecting, and in all probably 60-80 vehicles loaded up, including a number of large lorries, motorhomes, caravans and bunch of cars – plus 2 motorcycles (us). 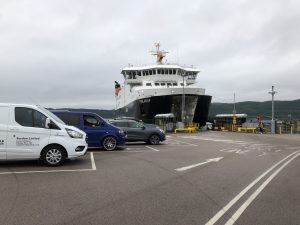 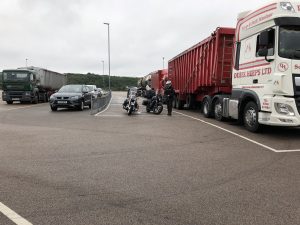 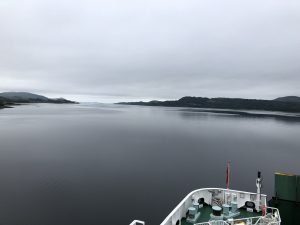 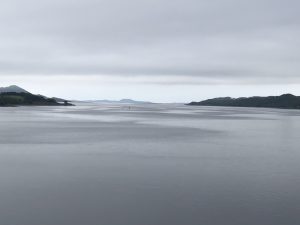 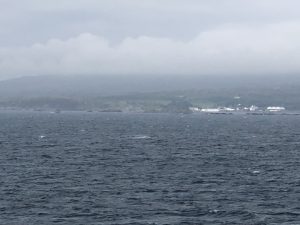 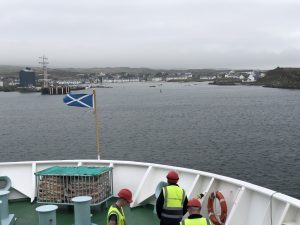 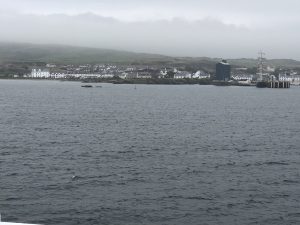 The crossing was uneventful, and offered us views of Gigha and then Islay as we neared. We passed the time drinking coffee and reading and web’ing, and a couple of hours later got the call to return to our vehicles for disembarkation. We were one of the first to leave, and rode all of about 2 minutes to our next hotel, on Charlotte Street in Port Ellen. We dropped the bags, arranged a cab and a whisky tour, and then went to the local equivalent of a deli to grab a sandwich for lunch before our tour.

Carols Cabs collected us from the hotel, and we wended our way north, along the high road, for about half an hour. We arrived at Caol Ila distillery around 1335, and our tour was set to start at 1400. A lot of you know that I am a fan of single malt scotch whiskies, and many of you know that I am a lover of Islay malts. Some of you even know that my favourite is Caol Ila, so I was rather excited for this visit. We had a “cask whisky” tour booked, and our guide took me, Lena, 2 Swiss chaps and bloke from Los Angeles on a private tour of the distillery. It was fascinating, and I walked the hallowed halls of the origin of my favourite tipple with significant awe and respect.

The tour concluded in a small room, filled with barrels and a few tables, plus a few traditional accoutrements from the whisky world – some half-made casks, some barrel furniture and stencils, a number of weird instruments and more. There was a table with 5 glasses on it, and we were seated to listen to our guide explain the different whiskies we were about to taste. 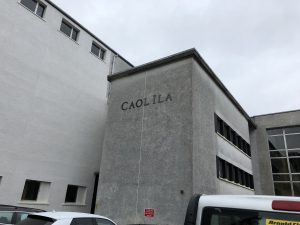 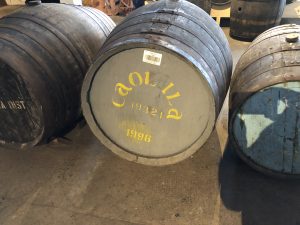 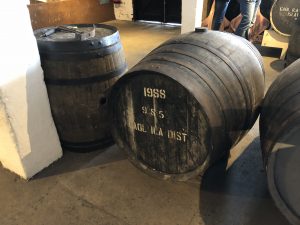 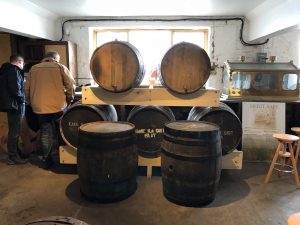 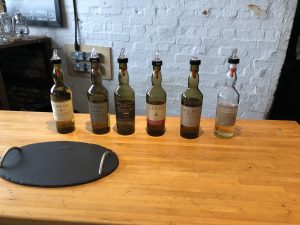 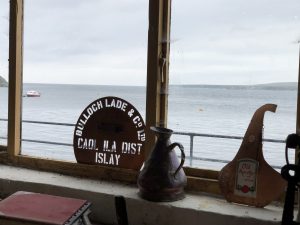 We had 6 cask strength whiskies, all the product of Caol Ila. They started from an un-peated 15 year old, which was light and quite un-flavoured, and then worked our way through a succession of more flavoured whiskies until we peaked. The next was a young 6 year old, light, sharp and quite immature. The 12 year old was more in line with what I am used to, but it had a 61% alcohol content, and really warmed you on the way down. The peated 15 was heavenly, and the last of the whiskies that are commercially available and made in US bourbon casks. The last 2 we tried were in European casks, the first from Jerez. This was a dark colour, sweeter and smoother than any of the others. At 22 years old, it was selected from near the peak of its taste range – I loved it. The final whisky was a 30 year old from a Spanish cask – quite complex and a bit dry for my taste – but after 5 other whiskies, I was very happy.

Visiting Caol Ila is a big bucket-list tick. I shall be content with any other distillery tour I do (and we already have a Speyside distillery tour booked), but I think I have peaked.

The cab collected us – we were in a rather well-oiled state – and brought us back to the hotel to prepare for a local dinner, at the Sea Salt restaurant. I will possibly check in later, if not, see you tomorrow when we head back to the mainland – we have a ferry to Oban at lunchtime.