Motorway days are not a bikers favourite kind of day. Long, straight and boring – but at least we were on the bikes and making progress. We woke up and had breakfast and chat with Span and Priya, and then went about the business of packing up our gear. On a road trip, it takes a couple of days to get into the packing routine, everything finds its own place in the bag or on the bike somewhere, and you fall into a familiar practise.

It was overcast as we left Halifax, and stayed that way for most of the day. the motorway heads west towards Manchester, and after 25 miles ish another starts to lead north. within an hour we were on the M6, the main western artery running north-south (approximately) for much of England. North of Lancaster the motorway gets a bit less boring, as it rises and falls towards the hills at Shap, and offers a few more curves and slow bends.

We stopped at one of the better-catered motorway services, Tebay in Cumbria. It was very busy, but had good food and coffee. We had a light lunch, in anticipation of an early dinner at our destination. It started raining a bit, so I put the waterproof covers over the bags, and zipped the waterproof liner into my jacket. Fortunately the rain didn’t really set in, and though we had the odd drizzle, it remained mostly dry for the rest of our day.

We finally passed through the last bit of England, and entered Scotland in the early afternoon. A few more motorway miles led us to Gretna Green, and here we left the motorway, and began our next phase of this trip, which will pretty much leave us motorway free for the next ten days. Pretty countryside, and lots of forests led us along the road west from Gretna, and took us to our first Scottish home, Castle Douglas. A small town with a seemingly very ageing population, it nevertheless is know as a good food spot – which is why I chose this destination.

We took a walk and bought a thermal underlayer each – I had been aware of the weather forecast, but somehow had packed as if I was heading tot he north of Italy, as we had done last year when the temperature hardly dipped below 30 degrees. It is somewhat cooler here  (about 17 degrees as a high yesterday), so a good base layer will be welcome.

After the successful purchase we returned to our lovely little B&B, Douglas House, and got ready for dinner. The lovely Carlo’s Italian restaurant hosted us, and it put on a great meal. We ate ourselves into a coma, accompanied by a fine bottle of Barolo, and then staggered back to the accommodation to collapse into bed and have an early night. See you in the morning 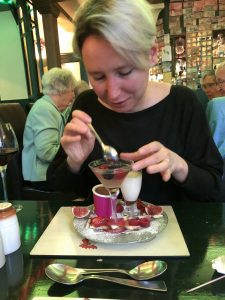