We woke up on the outskirts of quiet town in the north of France. It was early (for us) so we tried to not get up, but eventually had to surrender to the fact that we were not going back to sleep, and so we showered and had a continental breakfast in the hotel.

The first few days of a road trip usually entail some re-packing and adjusting of arrangements, and today was no exception. Most of my bag was unpacked and re-distributed, as was the main bag that goes into the top-box. Lena and I each have a bag in a side pannier, and we share the top-box, which has a lot of stuff like cameras, laptops, bike gear, shoes and toiletries in it. Happy with my re-packing, we loaded up, and set off towards Metz.

Today was planned as a “motorway” day. Motorbikers like twisty roads and scenery, and little traffic; motorways offer the opposite. However, our aim is to get south as quickly as we can, so todays route was mainly the Autoroute des Anglais, and then the Autoroute de l’Est.

Motorway miles are easy, generally pretty boring, and quick. We had very little traffic on our roads, and so we ate up the miles, stopping for a couple of refuels (bike and tummy) along the way. An un-remarkable trip, we arrived in Metz late afternoon. Our hotel is opposite the main train station, and I put the bike into the station car-park. However, the hotel had private parking for 5 Euro, so I decided to move the bike.

My car-parking ticket decided, in its own Gallic manner, to not cooperate with my attempts to leave the carpark or pay for the parking. I tried all the gates, parked up and went to talk to the station Information folk, and tried all the gates again, but to no avail. Eventually I had to ride around the side of the gates, and left without being able to pay for the parking. I relocated to the hotel garage, and headed up to our room for a well deserved (and very necessary) shower.

We walked to the old town, about 15 minutes from our hotel. We stopped in a large square and had a drink, and then wandered around until we found the Cathedral. It is a hugely ornate and impressive building, and we had 15 minutes to wander around inside, taking pics of the stained glass and ornamental architecture. 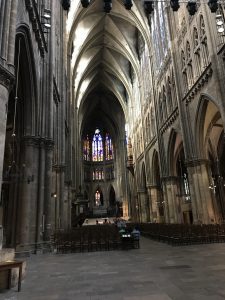 Dinner was steak, served al-fresco in a nice place on a busy pedestrian street near the Cathedral. Accompanied by a nice glass of red, and a homemade sauce, it was delicious.

We walked down to the Moselle river close by, took a few pictures of a large church on an Island in the river, and them ambled back to our hotel. 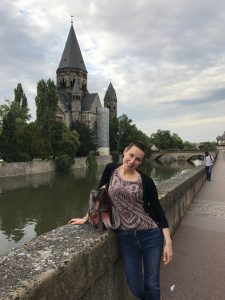 A pleasant evening, not too hot, ended what has been a pretty easy day – other than trying to liberate my bike from the train station carpark. Tomorrow, we head to the Black Forest in the southwest of Germany.