We wandered around the stalls this morning, looking at various bike related (some very tenuously) merchandise, and bought a few unnecessaries. We found a Latvian flag, and a couple of pirate flags to adorn our bikes for todays ride, but no South African flags, unfortunately. The highlight of today is the mass ride-out, a police and marshal led ride for any rally participant who wanted to join in. 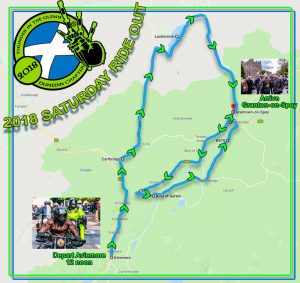 We inspected the lead bikes – a few VIPs had a set of brand new bikes, followed by the Dunedin Chapter crew (they are the rally organisers) with a load bikes sporting a variety of flags, and some beautiful custom bikes. 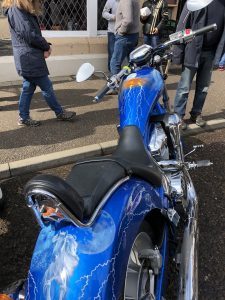 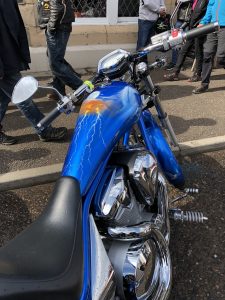 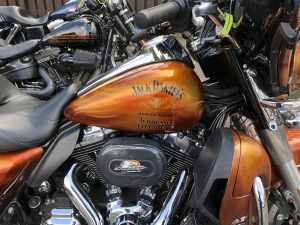 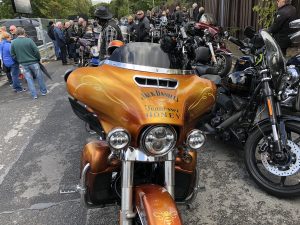 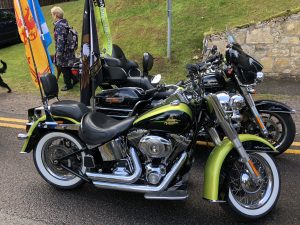 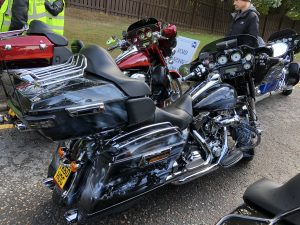 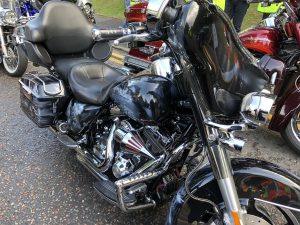 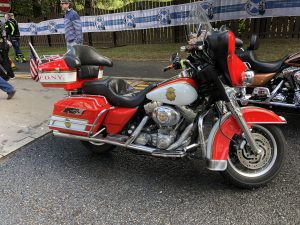 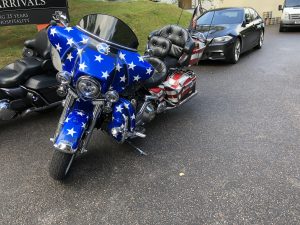 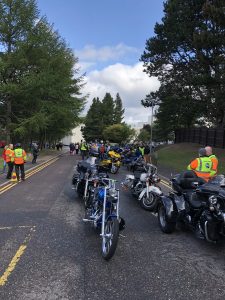 We then went back to our room to go through the pre-flight routine of gearing up, then got on the bikes, and joined the queue. I don’t know how many bikes rode today, but there were many hundreds, if not a thousand or more. Everyone queued patiently around the resort – the ride started at 1200, and it was 14 minutes before we were even able to move. 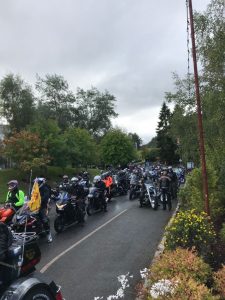 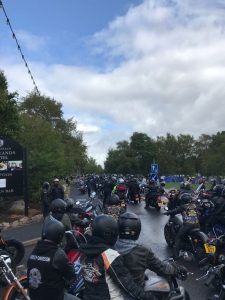 We joined the long snake of two rows of bikers as we made our way around the complex, and then headed down the hill towards the town. While the size of the riding crew was huge, I wasn’t expecting the reception we got from the town. Aviemore is a sleepy little hamlet in the Cairngorms, and the sound and sight of many hundred of bikes – mainly Harleys – rolling through their town brought them out in throngs. There were several thousand people lining the road through the town, all cheering, waving and photographing the passing snake.

It was quite a rush to take part in the ride, seeing so many supporters and spectators, and being a part of such a special event. The ride was very well organised, with police closing roads, and marshalls guiding the ride and holding traffic where necessary. We rode a very lovely route (see above) of around 50 miles. It took us through some pretty towns, a high moor, alongside Lochindorb, through Grantown-on-Spey and around again, ending up back in Grantown.

The high street had been closed, and there were hundreds more cheering the riders as we arrived. The marshals directed us to park along both sides of the road. We dismounted, had a wander around (and a much-needed wee), and then got some nice fish and chips. A further patrol along the bikes to admire some more custom pieces and browse some of the shops, and then we mounted up and headed back to the hotel – a direct route of about 16 miles.

Now we are chilling in the room, football on TV, and planning to go to the party this evening. There are a a couple of rock bands on at the main arena, and a blues band in one of the smaller venues, so we have some choices to make.