Not the longest day in mileage terms, but by far the most technical of our biking days thus far. Beautiful views accompanied a significant share of small country roads – never un-tarred, but often not far off.

We woke up in Oban to a wet drizzle. I went off to find a pharmacy for my insect bite – my right forefinger has a rather spectacular purple knuckle on top of the first knuckle on the finger. It is itchy and uncomfortable – probably a midge bite, but possibly a spider or even a tiger – hard to tell. Anyway, having purchased the recommended ointment, I returned, and we had breakfast as usual.

Loaded and rolling in a sight drizzle, we encountered a lot of traffic as we tried to leave Oban. We had chosen a route which took us the same way that 80% of Scotland was using to attend the Argyllshire Gathering, the Oban annual Highland games. We crawled along until we finally escaped the kilted throngs, and then headed up into the hills.

I had selected “Thrills” as the setting on the SatNav when creating this route, and it did not disappoint. We took tiny, almost farm roads, through a beautiful valley. There was almost no traffic, and we oooh’d and aaah’d our way along, stopping regularly for photo’s or to catch our breath – the riding was low speed, but sometimes challenging as the roads were wet, steep, gravelled and sometimes pot-holed. 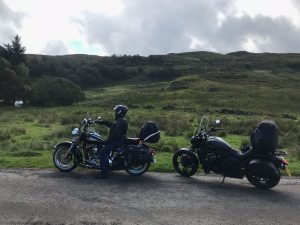 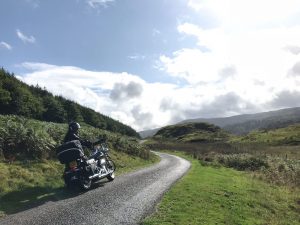 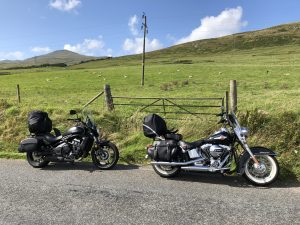 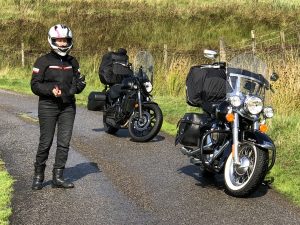 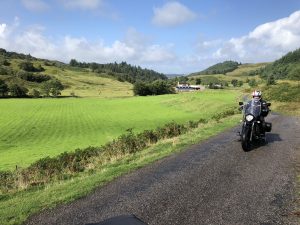 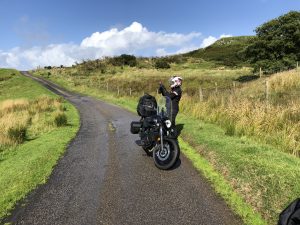 Our style of bikes – cruisers – are not the most nimble or elegant for this type of traverse, but we managed pretty well, without incident. We stopped to say hi to some Heelan Coo’s, which made Lena very happy. After an hour of windy wendy roads, passed along the west side of Loch Awe. We had been here a few days ago, on the opposite shore as we rode to Lochgilphead via Inverary. Not long after, we got onto the main road alongside the river Lochy. We had ridden in the opposite direction on this route, and stopped to skim stones on the river only on Monday, but it felt like weeks had passed.

The rain never quite set in as we rode. It threatened to get serious from time to time, but never broke out in full splendour – which we were grateful for. We stopped in Crianlarich for a decent pub lunch, and soon thereafter Sally SatNav took us off the main “A” road and back into the land of sheep tracks and woods. We road high above Loch Tay, under Ben Lawer, and it was magical. The scenery continued to take our breath away, the road wound along enjoyably, and we biked away happily. 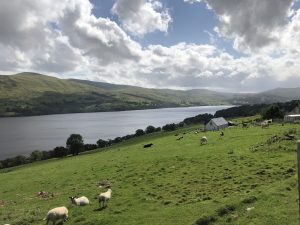 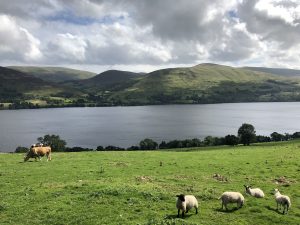 We reach Loch Rannoch after 3pm. We were both in need of a tankful of petrol, and the satnav took us to a local mechanics garage. He was not a friendly or helpful fellow, and was not selling petrol anyway, so we will hve to find something tomorrow, as we were only a mile from our hotel and the nearest petrol is apparently 20miles away.

The hotel is in a splendid location, with views across the loch. It is a rather under-populated area, so pretty wild in all directions. The hotel itself was probably grand 80 years ago, but has long since past its glory, and is now slightly faded. I think they would like to welcome onluy those of the gentry or old money, but have to put up with hairy biker oiks like us.

We had a little walk down to the loch – it was pretty wild and windy, and threatened to rain, but we made it there and back pretty unscathed. I am now sat in the grand lounge, awaiting our call to dinner and sipping a drop of Scotlands finest. I will catch you later…. 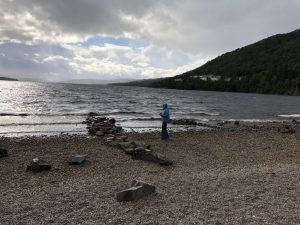