People in the city where I grew up say that you can have all 4 seasons in one day there. Well, on Islay, you can all 4 seasons in an hour. We woke around 7ish, and saw rain, wind, sunshine, calm, warmth, cold and the odd polar bear come and go. Well – maybe not the bears, but definitely everything else. The view from our room was lovely – straight over the bay – and some of the sunny views were stunning. 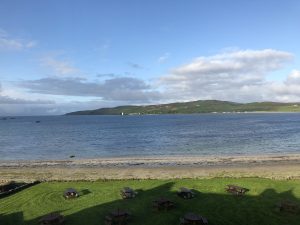 We had breakfast, and then slowly got ready – no rush, as the 4 seasons were favouring the winter/rain cycle. We had all of 22 miles to ride, from Port Ellen, which sits on the south of Islay, to Port Askaig, on the northeast side of the island. We finally set off about 1015, and stopped at Bowmore along the way to admire the sea and the small town centre. The rain came and went, and we were a bit damp by the time we got to the ferry port. 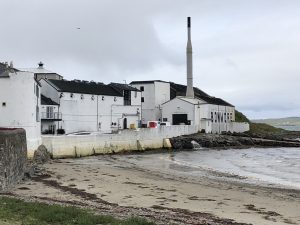 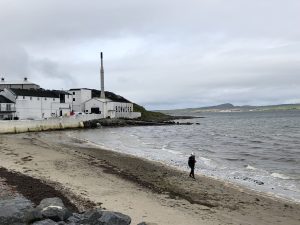 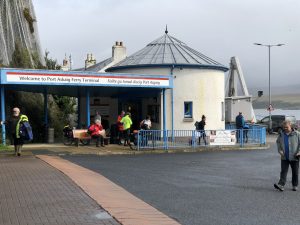 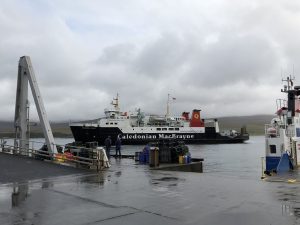 The crew set us to the front of the line to wait for the ferry to arrive, and when it did we were first to load. The crew let us go upstairs to settle in, while they strapped down the bikes. As you can imagine, bikes on a rolling ship could be unstable and potentially fall over, so they are strapped to anchor points in the floor to prevent such disaster.

After inspection, we chose  seats on the upper observation deck, and settled in for the 4 hour trip.

Shortly after we set off, we passed the Caol Ila distillery that we had visited yesterday, and it was lovely to get a couple of pictures from the sea. After that, the journey was pretty uneventful, and we had a nice lunch from the ships canteen along the way. I watched some Netflix and then an episode Dragons Den while Lena read her book. 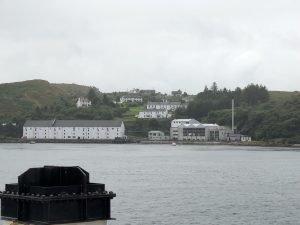 Arriving in Oban in what almost could be classed as sunshine, we rolled off the ferry and sped all of about half a mile to our hotel. Parked up behind the hotel, we checked in, and went for a wander to explore and purchase a few supplies. On the way back, we walked up a steep set of roads and paths to visit the McCaig Tower that sits above the small town.

McCaig was a banker who wanted to memorialise his name, and so he designed and then had built this tower which resembles the Coliseum. Completed in 1902, the year of his death, it was also a project intended to give the local stonemasons work through the winters, which was a fallow time for them. Anyway, it is a large folly, and dominates the views from the town. 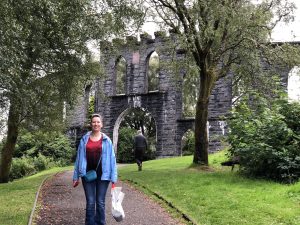 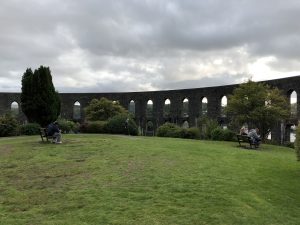 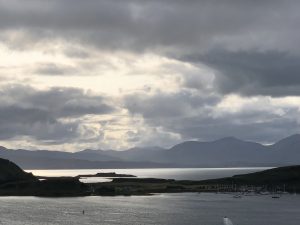 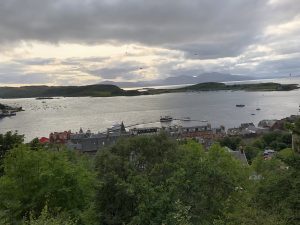 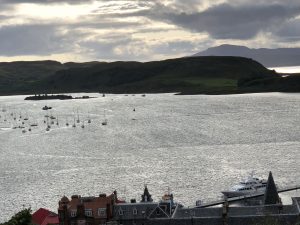 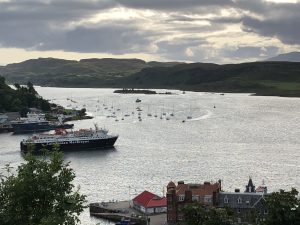 The tower provided some nice views across the bay and to other islands, and we made the right noises, took some photos and then walked back down the hill. On the way down we passed a house which had numerous practical art installations (mostly seating and walls that were covered in mosaics. There were also 2 interesting pieces of pairs of legs sticking out of the ground, with brightly coloured stockings and wellies on the feet. Odd. 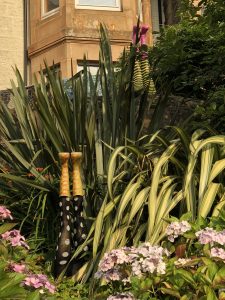 We dropped our goods back at the hotel, and then had a walk which lead us to a local hostelry, the Oban Inn. We had a good pub meal (Salmon fillet for the fairer one, and a steak and ale pie for the less dainty one). A pint and a wee dram of Islays finest, and we find ourselves back at the hotel bloggifying for the delight of our thousands of followers. G’night all.